It was a dark and stormy night … in late nineteenth Century Strafford County, New Hampshire, near Dover and the seacoast. The Bartlett family’s fields were soaked too wet for haying the next day. There was time to swap tales with a visitor at the kitchen table. One story went like this.

Well, then; up in Barrington, take the road that leads through Fly Market, then up around by Jerry Kingman’s and Eliphalet Foss’s, over Muchdo hill, past Robert Stacy’s to Hardscrabble, and there on till you take the road that leads over to the Leathers’s, and when you are pretty well on your way, you will pass an old cellar-hole. There was where the old witch lived, and her name was Moll Ellsworth.

She lived alone, except a black cat without a white hair on it. She planted her own garden, and raised enough for her. She went out carding and weaving. Sometimes she laid out the dead and watched all night with them alone.

She would take no money but silver, and she always bit it when she took it, else it would have worked harm to her, as a witch. Even witches have their limits like other people.

END_OF_DOCUMENT_TOKEN_TO_BE_REPLACED

John shows the others how to tell a resurrection story

In two previous posts, The Uncertaintist discussed why it appears that Mark may have intended his version of the story of Jairus’s daughter not to be a resurrection miracle (link). In Matthew’s telling, Jesus definitely restores a dead girl to life. Luke seems content to leave Jairus’s daughter ambiguous, but introduces a different and completely clear raising miracle, the widow’s son (link).

Regardless of what each author intended, some educated first century readers would have recognized the young adolescent girl’s condition as a possible case of a malady peculiar to women. According to the medical beliefs of the time, the affliction convincingly imitated death, but was easily and quickly curable. If that was the girl’s problem, then Jesus would have been telling the simple truth when he said in all three synoptic gospels that she wasn’t dead, but asleep

END_OF_DOCUMENT_TOKEN_TO_BE_REPLACED

Matthew and Luke weigh in on Jairus’s daughter

In all three synoptic Gospels, Jesus remarks that Jairus’s unconscious daughter is asleep, not dead, in reply to others who insist she has died. As described in the previous post (link), Mark told the story to be consistent with Jesus correcting onlookers’ hasty misdiagnosis of a coma as death. Erroneous death declarations were a recognized hazard in the ancient world. Some of Mark’s contemporaries believed that a death-like but easily and rapidly reversible comatose condition sometimes afflicted women.

Mark set his story within a context that supported a matter-of-fact reading of Jesus’s remark. If Jairus’s daughter was dead, then a boy who seemed dead to onlookers should have been dead, too. Pilate’s skeptical reception of Joseph’s testimony about Jesus’s death in Mark underlines the flimsy foundation for the announcement of the children’s deaths. If disciples had seen Jesus revive a dead girl, then it needs explanation how the disciples utterly fail to understand Jesus’s predictions of his resurrection.

Matthew dissolves Mark‘s ambiguity by having Jesus assert plainly that the dead have been raised, referring to Jairus’s daughter. Luke introduces a different revitalization which Jesus refers to when stating that the dead have been raised. This leaves Luke free later on to tell his own ambiguous version of Jairus’s daughter’s story without diminishing his Jesus’s demonstrated authority over death.

END_OF_DOCUMENT_TOKEN_TO_BE_REPLACED

In the Gospel of Matthew, Jesus restores to life the deceased young daughter of a man named Jairus. Versions of the incident appear in the other two synoptic Gospels, Mark and Luke, but not in John.

A peculiar feature of all three tellings is that Jesus says aloud that the girl has not died, but is sleeping. In harmony with Matthew, this statement is often read today the same way in all three versions: not as a statement of fact but rather as a teaching metaphor. That is, Jesus’s supposed meaning is that the girl has died, but that death isn’t a permanent condition. However well that interpretation fits Matthew, it is less clear that it suits Mark.

In the first century, among many ways that unconsciousness might be mistaken for death, some educated people believed that women were at special risk to fall into a state that resembled death. The condition was reversible, and rapidly so. Unlike Matthew, Mark does nothing to dissuade his educated readers from thinking that Jairus’s daughter is an example of this phenomenon. On the contrary, in the story details Mark chooses and in the context of his gospel as a whole, premature diagnosis of death appears to be the interpretation which Mark intends for at least some of his potential ancient audience.

That is to say, Mark portrays Jesus as telling the factual truth of the case. In this portrayal, Jesus’s use of “sleep” is indeed a figure of speech, but not a euphemism for death, rather an apt layman’s descriptive term for a comatose state, one kind of which was believed at the time to endanger women especially.

END_OF_DOCUMENT_TOKEN_TO_BE_REPLACED 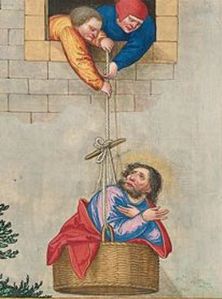 The Aretas puzzle seems hardly a puzzle at all, not at first. In his second letter to the Corinthians, Paul mentions that during the reign of a king named Aretas, the apostle fled Damascus dramatically, by being lowered in a basket over the city wall.

Who was Paul’s King Aretas?

If we accept the “standard model” of Christian origins, particularly its timeline that Christianity began during the fourth decade of the Common Era, then there’s only one plausible candidate: Aretas IV, king of the Nabateans. After ruling for approximately 50 years, he died in 40 CE. That’s within a decade after Paul’s conversion according to the consensus view.

The reign of Aretas III had ended about a century before the death of Aretas IV, and there was no Aretas V, so far as we know. Therefore, Aretas IV is the king Paul mentioned, done and dusted.

The puzzle is to suppose that someone didn’t already accept the standard model of Christian origins, and was trying to estimate a date for this incident from Paul’s letters, non-Christian sources like Josephus, and physical evidence alone. Why not Aretas III? He actually ruled Damascus for a time (we have coins to prove it), while Aretas IV never did, so far as we know. Why couldn’t Paul have been fleeing from that earlier Aretas?

Well, maybe he could have been …

END_OF_DOCUMENT_TOKEN_TO_BE_REPLACED

The only place in the canonical New Testament where you might be told otherwise is Mark 3:21, which the popular New International Version translates: “When his family heard about this, they went to take charge of him, for they said, ‘He is out of his mind.'” Many other English translations of this verse are similar (link).

The popularity of this unflattering glimpse of the holy family is a mystery. Mark‘s original Greek is thoroughly vague. The verb translated as to take charge of (kratesai) covers both welcome and unwelcome touching, whether for healing (as at verse 1:31), or to make an arrest (as in Gethsemane, 14:46). The verb translated as he is out of his mind (exeste) similarly applies equally well to a variety of mental states, from the positive astonishment at Jesus’s teaching and miracles (for example, verse 2:12) to something negative that contrasts with sobriety or calm demeanor (2 Corinthians 5:13).

It’s even vague whether Jesus’s family is involved at all. The Greek phrase is no more specific than something like those who are close to him (hoi par’ autou). In context, Jesus’s family is one reasonable inference about Mark’s meaning, but many English translations follow the 1611 King James Version here and say his friends instead. James McGrath recently offered discussion of still other reasonable views about who might be close to Jesus (link). Regardless, whether they are friends or family or somebody else, some of those who know Jesus well are often portrayed in translated Christian literature as having prepared a physical intervention based on their appraisal that Jesus’s mental state was dodgy.

This posting puzzles out what Mark intended this verse to convey, and why a master craftsman wrote it so opaquely. Something important is at stake. Christians promoting an unflattering “factoid” about Jesus without support from the source text undercuts a widely cited heuristic used for discerning supposed facts about Jesus’s life, including whether or not Jesus was a real person who actually lived.