It was a dark and stormy night … in late nineteenth Century Strafford County, New Hampshire, near Dover and the seacoast. The Bartlett family’s fields were soaked too wet for haying the next day. There was time to swap tales with a visitor at the kitchen table. One story went like this.

Well, then; up in Barrington, take the road that leads through Fly Market, then up around by Jerry Kingman’s and Eliphalet Foss’s, over Muchdo hill, past Robert Stacy’s to Hardscrabble, and there on till you take the road that leads over to the Leathers’s, and when you are pretty well on your way, you will pass an old cellar-hole. There was where the old witch lived, and her name was Moll Ellsworth.

She lived alone, except a black cat without a white hair on it. She planted her own garden, and raised enough for her. She went out carding and weaving. Sometimes she laid out the dead and watched all night with them alone.

She would take no money but silver, and she always bit it when she took it, else it would have worked harm to her, as a witch. Even witches have their limits like other people.

Everybody was afraid of her, and so but few ever went into her house. There used to be lights in her house at all times of night, and some people said that Henry Tufts used to make it one of his hiding-places, and pay her well for it, for no one would dare to look there for him, and the sheriffs and constables always wanted him.

Now Nick Scruton used to live a little ways beyond her, and he used to sauce her when he went by, and she scowled and bit her thumb at him. And Scruton’s horses were lame,and his cows were gargety, and the milk was bloody, his wife was sick, his pigs died, and Scruton was just sure that old Moll was at the bottom of it all.

Then, as he was coming home from Dover one day with too much rum in him, he saw the old witch walking along the road. He tried to scare her, by seeing how near he could come to her, and not hit her. He rode too near and knocked the old woman head over heels into the Canada thistles. She got up awful mad, cursed him, and vowed revenge.

Then Scruton’s chickens disappeared. His dog died. His cat was found in the well, with bones and old boots, and one night when the cows came home, he found a long brass pin sticking through the teat of one of them. He had as much as he could do to pull it out the cow kicked so.

He got it out, but it took all his strength to hold it. He told his wife to bring a teakettle of boiling water, and to put a piece of silver and a leaf out of the New Testament into it, and she did. Then Nick Scruton, by main force, put the pin in it. Such a blood-curdling screech as came out of that teakettle you never heard, no, nor never will.

The next morning the old woman was found at her own door, badly scalded. Soon she disappeared, cat and all. Doctor Fernald said she went over to Lee to live with her brother. But some folks said the devil flew away with her, some such night as last night was, and if you don’t believe the story, I can take you up to Barrington and show you the cellar-hole.

The Wild Artist and the vagabond thief

This tale comes from The Wild Artist in Boston (pp. 53-54), a novel about a young Strafford County farmer named Roy Bartlett who succeeds as a painter in Boston. The book was self-published in 1888 by James Bartlett Wiggin (1832-1908), a Strafford County native who moved to Greater Boston and joined the Hub’s literary community.

Is Moll Ellsworth a real person who actually lived? The Wild Artist includes many historical figures. Henry Tufts (1748-1831), for example, who was mentioned in Moll’s story, was a real-life career criminal. He traveled throughout the northeast states practicing thievery, arson, serial bigamy, fraud, … and one honest profession, herbal medicine. He studied with the famous Native American healer Molly Ockett (d. 1816).

Henry published his memoirs in 1807. Few copies of his book survive, supposedly because the upstanding Tufts family destroyed whatever copies they could buy. Recently, a free-to-use transcription has become available (link). It is a page-turner.

But Moll Ellsworth? When asked whether he believes the tale, the storyteller answers

I believe it is about the biggest lie I ever told, but that is all the kind you can have, if you want a witch story. It must be fictitious.

Nevertheless, it is difficult to eliminate that author Wiggin had someone in mind when creating Moll Ellsworth. Maybe she was another self-sufficient eighteenth century New England woman like Elizabeth Lewis Blatchford (link). Maybe, like Mrs. Blatchford, her “witch-story name” isn’t her real name, the name that would appear in official records. Or maybe Moll represents a type of independent woman found throughout post-Salem New England, rather than any one specific individual.

Regardless, after ordinary diligence sifting through the usual genealogical sources, Moll’s trail runs cold at The Wild Artist. 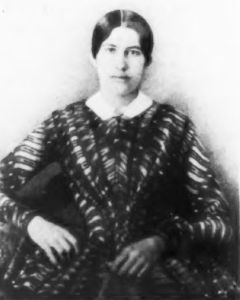 [A]t the foot is a huge rock tapestried with moss and vines, near which, according to the “Wild Artist,” once lived a witch named Moll Ellsworth, whose sole companion was a black cat without a single white hair. The devil is said to have flown away with her in a gale of wind one dark, tempestuous night. At all events, she mysteriously disappeared, and with her the black cat, said to have embodied a still darker fiend.

Thompson was working from memory without the source text before her. Wiggin’s cellar hole, which was located well beyond Muchado Hill, has been replaced by a rock at its very base, a rock unmentioned by Wiggin at all. Story corruption by errant memory has befallen authors both ancient (St Jerome link and Origen link) and modern (Bart Ehrman link).

At least it must have been clear to Thompson’s first readers that her source was a recent novel, popular enough for her to cite only its abbreviated title. Whether or not any real Moll Ellsworth ever lived in Barrington, and if so where, Thompson plainly labeled her Moll as a character from fiction.

From fictional to traditional

Over time, familiarity with Wiggin’s book faded. By the mid-twentieth century, few would know who or what Thompson’s phrase “the ‘Wild Artist'” meant. Without the internet, it wouldn’t be easy to find out.

In 1963, Morton Hayes Wiggin (1894-1965; no known relation to James Bartlett Wiggin) published A History of Barrington, New Hampshire (publisher not indicated). Its bibliography includes Thompson’s gazeteer, and Wiggin evidently based his comment about Moll (p. 1) on Thompson:

At the foot of [Muchado] hill is a huge rock covered with moss and vines where a witch is said to have once lived. Her name was Moll Ellsworth and her only companion was a black cat with not a single white hair. The devil is said to have flown away with her in a gale of wind one dark, tempestuous night. Anyway, she disappeared mysteriously with her black cat.

Emphasis on the formulaic is said is added here for discussion. That the story began with the Wild Artist is lost. While the formula absolves the town historian from vouching for the factual accuracy of Moll’s story, it suggests misleadingly that his source is a living oral tradition, and not a passage from a single specific novel, somewhat misremembered by his source.

From traditional to historical 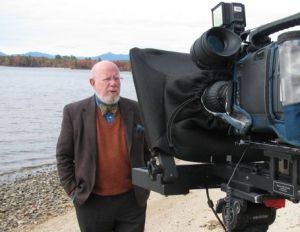 At the bottom of Muchado Hill there was a large, vine-covered rock where a witch named Moll Ellsworth once lived with her familiar, a black cat. Moll, the town history tells us, flew away on her broomstick in a gale one night and was never seen again.

And there you have it: a respected source proposes that a real Moll Ellsworth actually lived at the foot of Muchado Hill, citing (if only obliquely) competent authority.

The point is not to chastise Wetherbee, but to illustrate how far one story’s historicity evolved across a few generations. Wetherbee didn’t do this alone. He may even be correct that Moll really lived, but there’s no sound historical way to know that.

James Wiggin’s story of Moll Ellsworth wasn’t “garbled” by the later raconteurs, as if in some children’s game of “telephone,” but rather it was reshaped by regular forces. Unverified details that felt as if recalled from reading played a part (the cellar hole that moved and became a rock). So did colorful embellishment (Thompson’s “darker fiend” and Wetherbee’s broomstick).

The final crucial “historicization” of Moll, from “is said to have once lived” to just “once lived,” is harder to explain. Here is a conjecture.

Wetherbee’s book isn’t purely prose; it is a record of oral performances, what he said or planned to say on television. Genre matters. On camera, maybe Wetherbee had modulated his voice and put a twinkle in his eye, and later hoped these effects would still come through when his words were transcribed in lifeless print. It is after all, a witch story and Wetherbee’s readers know that is all the kind you can have, if you want a witch story. It must be fictitious.

This site uses Akismet to reduce spam. Learn how your comment data is processed.